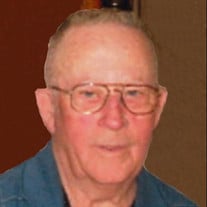 Raymond F. Dionne, age 87, of Bourbonnais passed away Wednesday, September 15, 2021 at Citadel of Bourbonnais. He was born January 29, 1934 in Bourbonnais, the son of Armel & Christabell (Surprenant) Dionne. Raymond married Norma Jean Rantz on February 6, 1954 at St. Joseph Catholic Church in Bradley. She preceded him in death on October 12, 2009. Raymond worked at Armour Pharmaceutical from 1953 until his retirement in 1997. He loved golfing, riding motorcycles, and farm tractors. Raymond enjoyed working in the yard, watching sports, and was an avid hunter. He was a veteran of the United States Army. Raymond was a parishioner of Maternity B.V.M. Catholic Church. Surviving are two sons, Terry Dionne of Downers Grove and Michael Dionne (Britton Eby) of Bourbonnais; two daughters, Debra (Gary) Gunn of Beaverville and Kathy Dionne of Bourbonnais; five grandchildren, Rob Joubert, Nicholas Dionne, Elizabeth Kingbird, Christopher Dionne, and Morgan Mittler; five great-grandchildren, Jonas, Seth, Mason, Chloe, and Camden; two sisters, Ruth Klein of WI and Madonna Lane of CO; and one brother, Robert Dionne of AZ. In addition to his wife, Norma Jean Dionne, Raymond is preceded in death by his brother and sister-in-law, Roland & Iris Dionne and one daughter-in-law, Deborah Dionne. Visitation will be held from 4-8 p.m. on Tuesday, September 28, 2021 at Clancy-Gernon Funeral Home in Bourbonnais. A funeral Mass will be held at 10 a.m. Wednesday, September 29, 2021 at Maternity B.V.M. Catholic Church in Bourbonnais. Interment will follow at Kankakee Memorial Gardens in Aroma Township. In lieu of flowers, memorials may be made to Uplifted Care.

The family of Raymond F. Dionne created this Life Tributes page to make it easy to share your memories.