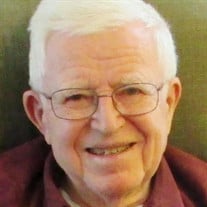 Reuben M. Riegel, age 89, of Bonfield, Illinois passed away on Sunday, March 6, 2022, at Miller Rehabilitation Center in Kankakee. He was born September 11, 1932, the son of Elmer and Olive (Buente) Riegel. Reuben married Dorothy Wood on March 9, 1957, at the Bonfield United Brethren Church. Reuben was a graduate of Reddick High School in 1950 and a retired farmer. He was drafted into the Army on November 18, 1953, and honorably discharged on November 3, 1955. He proudly served his country in Camp Kobe, Japan. Reuben was active in his church and held positions in the Bonfield Evangelical United Methodist Church as financial secretary, Ad board member, trustee, and usher. He joined the Kankakee County Farm Bureau in December of 1955 and was a member of the organization for over 65 years. He represented Salina Township on the Kankakee County Farm Bureau Board from 1975 to 1991. Reuben was Vice President from 1981 to 1983 and President from 1983 until 1991. He was also a member of the Kankakee County Extension. He enjoyed woodworking, reading and spending time with his family. Surviving are his wife of nearly 65 years, Dorothy Riegel of Bonfield; one son, James Riegel & special friend Pam Mack of Mt. Prospect, Illinois; two daughters, Marcia (Claude) Jackson of Florissant, Missouri, and Linda Riegel of Normal, Illinois; three grandchildren, Patrick Lindley (Jacque Goodwin), Nathan Lindley, and Amber (Josh) Piercy; three great-grandchildren, Kylee, Emilee, and Brett; two sisters-in-law, Joyce Riegel and Maggie Wilson; and several nephews and nieces. Reuben was preceded in death by his parents, his aunt, Henrietta Buente who helped raise the children after their mother died in 1936; three brothers, Rollin, Arland and Paul Riegel and two sisters, Carolyn Riegel and Elaine Frenzke. Visitation will be held Friday, March 11th from 4 pm until 7 pm at Clancy-Gernon-Hertz Funeral Home at 1480 W Court St, Kankakee, IL. On Saturday, March 12th visitation will start at 10 am at Bonfield Evangelical United Methodist Church at 348 E Smith St, Bonfield, IL followed by the funeral service beginning at 11 am. Interment will be at the Maple Grove Cemetery in Bonfield, Illinois. In lieu of flowers, memorials may be made to Bonfield Evangelical United Methodist Church.

The family of Reuben M. Riegel created this Life Tributes page to make it easy to share your memories.

Reuben M. Riegel, age 89, of Bonfield, Illinois passed away on...