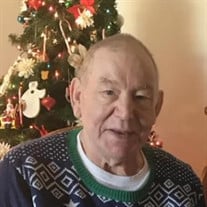 Roger Michael “Mike” George, age 75, of Bourbonnais passed away Wednesday, February 23, 2022 at AMITA St. Mary’s Hospital in Kankakee. He was born February 18, 1947 in DuQuoin, the son of Harley & Annabelle Walters George. Mike served in the U.S. Army 1965-1968 and was stationed in Wachenheim, Germany during the Vietnam War. After serving, he became a truck driver until retiring in 1998. Mike loved watching Jeopardy, the St. Louis Cardinals, and Duke Basketball. Most of all, he enjoyed spending time with his family and playing with his grandson. He had the gift of gab and enjoyed talking with everyone he met. Surviving are his wife, Colette George of Bourbonnais; two sons, Derrick & Kayla George and Joshua & Ashley George; one grandson, Eli Michael George; brothers, Dan & Mary Ann George, Bill & Amelia George, and Bob George; one sister, Anita Dagnan; and numerous nieces and nephews. Mike is preceded in death by his parents; two brothers, Harley E. George and Tom George; one sister, Kathleen Warren; one nephew, Rusty Collins; and one niece, Christy Collins. Cremation rites have been accorded. A memorial visitation will be held 10:00 a.m. until the 12:00 Noon memorial service on Tuesday, March 1, 2022 at Clancy-Gernon Funeral Home in Bourbonnais. Memorials may be made to the family wishes.

The family of Roger Michael George created this Life Tributes page to make it easy to share your memories.