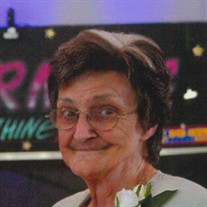 Sandra K. Hickory, age 79, of Bradley, passed away Tuesday, July 20, 2021 at AMITA St. Mary’s Hospital in Kankakee. She was born June 19, 1942 in Kankakee, the daughter of Harding & Melba Sirois Dufrain. Sandra married Joseph Hickory on September 3, 1960. He preceded her in death on December 30, 2013. She was a retired employee of Holiday Inn Express, owner of Bradley Liquors, and had previously worked at K-mart. She enjoyed cooking, playing cards, spending time in Branson, MO, and being with her grandchildren. Sandra was a parishioner of St. Joseph Catholic Church in Bradley. Surviving are one son and daughter-in-law, Kevin & Kennilyn Hickory of Momence; one sister, Diane Tighe of Bradley; two brothers and one sister-in-law, Ronnie Dufrain of Bourbonnais and Dennis & Brenda Dufrain of Bradley; four grandchildren, Kristin (Brandon) Meents, Ryan (Brooke) Hickory, Jessica (Matt) Staniszeski, and Teage (Garrett) Drinnon; seven great-grandchildren, Faith, Preston, Liam, Evan, Beckett, Elliott, and Jordin. In addition to her husband, Sandra is preceded in death by her parents; one daughter, Kimberly; and one sister, Sherry Morgan. Visitation will be held from 9:00 a.m. until the 11:00 a.m. funeral service on Saturday, July 24, 2021 at Clancy-Gernon Funeral Home, Bourbonnais. Entombment will follow at Mound Grove Gardens in Kankakee.

The family of Sandra K. Hickory created this Life Tributes page to make it easy to share your memories.