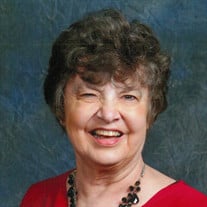 Sandra “Sandy” Reedy, age 80, of Bourbonnais passed away Sunday, November 7, 2021 at Bickford House of Bourbonnais. She was born October 28, 1941 in Pekin, IL, the daughter of Leland Keith & Laura (Parkhurst) Peck. Sandy attended Olivet Nazarene University from 1959-1963, and returned to school to obtain her Registered Nurse degree at age 52 from Kankakee Community College. She worked as a nurse for 24 years, serving 19 of those years at Riverside Medical Center in Kankakee, where she retired at age 76. Sandy was a long-time member of College Church of the Nazarene in Bourbonnais, and a life-time member of the Church of the Nazarene denomination. Sandy was married to George Ide of Tampa, FL from 1963-1987, and then to David Reedy of Bourbonnais from 1989 to 1992, to whom she remained close friends until his death in 2015. Surviving are one daughter and son-in-law, Sherri & Stephen Hendrix of Grass Lake, MI; four grandchildren and a grandson-in-law, Nichelle Winn & Jason Dryan, Lauren Winn, Christian Hendrix, Cassandra Hendrix; two sisters and two brothers-in-law, Janet & Jim Reed of St. Joseph, IL and Donna & David Wine of Bourbonnais; one brother, David Peck of Cape Coral, FL; special friend, Lowell Thill of Bourbonnais; a great-grandson, and many nieces and nephews. Sandra is preceded in death by her parents and one daughter, Pamela Jill Ide Schmisek. Cremation rites have been accorded. A memorial visitation will be held from 4-7 p.m. Monday, November 15, 2021 at Clancy-Gernon Funeral Home in Bourbonnais. An additional visitation will be held from 10 a.m. until the time of the 11 a.m. memorial service on Tuesday, November 16, 2021, at College Church of the Nazarene in Bourbonnais. Rev. Brad Thompson will officiate the memorial service. Inurnment will be held at Mt. Hope Cemetery at a later date. Memorials may be made to the Cystic Fibrosis Foundation in lieu of flowers.

The family of Sandra "Sandy" Reedy created this Life Tributes page to make it easy to share your memories.