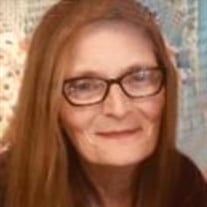 Sharon Anne Palzer, age 74, of Kankakee, passed away Thursday, September 16, 2021 at her daughter’s home. She was born June 9, 1947 in Kankakee, the daughter of Louis & Elsie Borshnack Dumas. Sharon was a former employee of Provena Fortin Villa and had also worked at Carson Pirie Scott. She enjoyed gardening, painting, and spending time with her grandchildren. Sharon was a loving mother. She was a parishioner of St. John Paul II Catholic Church in Kankakee. Surviving are one son and daughter-in-law, Benjamin Palzer & Alanah Wright of Kankakee; three daughters and two sons-in-law, Bridget & Gayle Bouck of Bourbonnais, Beth & Nathan McCue of Fayetteville, NC, and Brittany Palzer of Kankakee; one sister, Linda Weber of Cissna Park; five grandchildren, Abigayle Bouck, Chase Bouck, Ramsey McCue, Reed McCue, and Ean Palzer; and her former husband, Thomas Palzer of Rancho Cucamonga, CA. Sharon is preceded in death by her parents; and one brother-in-law, Roger Weber. Cremation rites have been accorded. A memorial visitation will be held from 9 a.m. until the time of the 10:30 a.m. memorial service on Monday, September 20, 2021 at Clancy-Gernon Funeral Home in Bourbonnais. Inurnment will follow at Mt. Hope Cemetery in Goodrich. In lieu of flowers memorials may be made to the family wishes.

Sharon Anne Palzer, age 74, of Kankakee, passed away Thursday, September 16, 2021 at her daughter&#8217;s home. She was born June 9, 1947 in Kankakee, the daughter of Louis & Elsie Borshnack Dumas. Sharon was a former employee of Provena Fortin... View Obituary & Service Information

The family of Sharon Anne Palzer created this Life Tributes page to make it easy to share your memories.