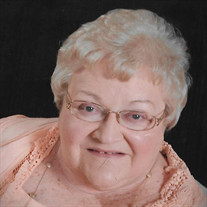 Shirley F. Brunner, age 76, of Herscher, passed away on Thursday, June 10, 2021 at her home. She was born on November 23, 1944 in Bonfield, the daughter of Fred and Edna (Margrey) Hall. She married Ivan Brunner on November 6, 1965. Shirley graduated from Herscher High School in 1962 and from Kankakee Community College’s Nursing program in 1990. She was a member of Grand Prairie United Methodist Church and Martha Circle. She was the church organist at Trinity Methodist Church in Kankakee for 55 years. She also accompanied the choral department at Herscher Grade School and Herscher High School for many years. Shirley’s family held community picnics and fireworks for 20 years. She worked as a registered nurse at Riverside Hospital for 3 years and was the phone nurse for Dr. Jeff Long for 10 years. Shirley volunteered with 4-H. She was a lifeguard and taught swimming lessons at Salina Sportsmans Club. She is survived by her husband of 55 years, Ivan Brunner of Herscher; one son and daughter-in-law, Gary and Kristina Brunner, of Pontiac; one daughter, Gayle Brunner of Palatine; twin grandsons, Garrett and Griffin Brunner, of Pontiac; one brother and sister-in-law, Don and Terry Hall of Bonfield; brothers-in-law and sisters-in-law, Monique Brunner of Paray Vielle, France, Rose Dunn of Elgin, Margaret and Eugene Reardanz of Kankakee, Wilbert and Asenath Brunner of Kankakee, and Maria Brunner of Scottsdale, AZ; and special niece, Sharon Call of Avon Lake, OH. She was preceded in death by her parents; sister and brother-in-law, Edna Mae and Clarence Ravn; brother, Ted Hall; and brothers-in-law, Albert Brunner, Donald Dunn, and Melvin Brunner. Visitation will be held from 5:00 pm until 8:00 pm on Monday, June 14, 2021 at Trinity United Methodist Church in Kankakee (963 S. 3rd Ave.). An additional visitation will be held from 10:00 am until the time of the 11:00 am funeral service on Tuesday, June 15, 2021 also at Trinity United Methodist Church in Kankakee. Rev. Valerie Mezger and Rev. Keith Blankenship will officiate the funeral service. Cremation rites will be accorded following services. Inurnment will take place at a later date at Grand Prairie Cemetery. Memorials may be made to Trinity United Methodist Church or Grand Prairie United Methodist Church.

The family of Shirley F. Brunner created this Life Tributes page to make it easy to share your memories.

Shirley F. Brunner, age 76, of Herscher, passed away on Thursday,...