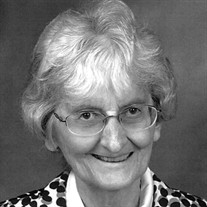 Sister Myra Dionne SSCM (Sister Joseph Marie), age 94, of Clifton entered new life Saturday, April 2, 2022. Myra Josephine Dionne was born on September 3, 1927 in Beaverville, the 17th of 18 children, to Joseph & Esma (Fortin) Dionne. Sister Myra attended Holy Family Academy for grade school and high school. After graduation, she entered the novitiate of the Servants of the Holy Heart of Mary. Sister Myra made her religious profession on January 25, 1947. This year, Sister Myra celebrated 75 years of membership in the congregation. Sister Myra was an educator for 43 years. She helped open St. Mary Magdalene School in Joliet, IL; she taught second graders at St. Gall School in Chicago, and then helped open another school, St. Alphonsus in Brooklyn Center, MN. She always had compassion for children who had difficulty learning to read. That passion sent her to the University of Minnesota to earn a master’s degree in Special Education with a major in Remedial Reading. Sister Myra got a lot of joy helping the children overcome the challenges of learning to read. After leaving education, Sister Myra continued to find joy in being and doing for others. She devoted her time to Nazareth Spirituality Center in Batavia, IL. There, Sister Myra was the coordinater and always made sure that the guests had everything they needed. She also was the leader of the Affiliate group in Batavia, making the monthly meeting comfortable. For several years, Sister Myra answered the phones and greeted visitors always with a smile and kind words. Sister Myra was preceded in death by her parents; sisters, Cecile Guimond, Helena Cash, Julia Hansen, Dorothy Hubert, Anna Marie Slater, Florence Karsgaard, Marcella Blanchette, Theresa DeBarre, and Joanne LaFond; and brothers, Leroy, Armel, Emory, Harold, Lawrence, Remie, Lloyd, and Alfred. She leaves behind many nieces, nephews, and other family members, friends, and Sisters of her religious congregation-the Servants of the Holy Heart of Mary. A visitation will be held from 9:30 a.m. until the time of the 11 a.m. funeral Mass on Wednesday, April 6, 2022 at St. Mary’s Church in Beaverville. Interment will follow in the sister’s section of St. Mary’s Cemetery in Beaverville. Memorials may be made in memory of Sister Myra to the Servants of the Holy Heart of Mary, 2041 West State Route 113, Kankakee, IL 60901. Arrangements by Clancy-Gernon Funeral Home in Bourbonnais.

The family of Sister Myra Dionne SSCM created this Life Tributes page to make it easy to share your memories.