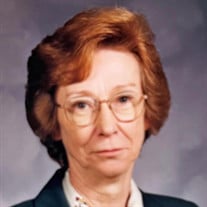 Sondra Ellen Patchett, age 80, of Kankakee passed away peacefully Tuesday, November 2, 2021 in Plainfield at Lakewood Nursing & Rehab Center. She was born August 13, 1941 in Tamaroa, IL the daughter of Marion “Ken” & Hilda (Smith) Preston. She grew up in Gibson City and graduated from Illinois State University. Sondra married James "Jim" Patchett on June 6, 1964 at St. Rose of Lima Catholic Church in Kankakee. He preceded her in death in 1994. She moved to Kankakee to teach at West Junior High School where she met her husband. She later taught English and worked in the library at Bishop McNamara High School. Although she was known as a demanding and influential teacher, her real love was the library. When the family moved to Georgia, Sondra was the head librarian and taught English at two schools. After her husband’s passing, she moved back to Kankakee, taught at Wilmington Middle School and finished her career at Kankakee High School. After retirement, she worked at the Limestone Library. Throughout her library and teaching careers, Sondra created long lasting relationships with her coworkers. Sondra enjoyed time with friends playing Bridge, golfing, book clubs, movie club and hosting dinner parties. She was an avid traveler visiting over 20 countries. She also enjoyed attending her grandchildren’s activities. She was extremely grateful for her family and the friends who were so generous with their time and attention helping her day to day especially as her health declined. Sondra was a former parishioner of St. Teresa Catholic Church in Kankakee and then later, St. Martin of Tours Catholic Church in Kankakee. Surviving are one daughter and son-in-law, Jill & Jay Munce of Park Ridge; one son and daughter-in-law, James & Meredith Patchett of Plainfield; five grandchildren, Alec Munce, Maggi Munce, Evan Patchett, Mason Patchett, and Leah Patchett; as well as several dear nieces, nephews, and cousins. In addition to her husband, James Patchett, Sondra is preceded in death by her parents; two brothers, Gene Preston and Jerry Preston; and one sister, Kay Marchiando. Cremation rites have been accorded. A memorial visitation will be held from 11 a.m. until the 1 p.m. memorial service on Saturday, November 6, 2021 at Clancy-Gernon-Hertz Funeral Home in Kankakee. Memorials may be made to the family wishes, which will be donated to the Kankakee Public Library made in Sondra's name.

The family of Sondra Ellen Patchett created this Life Tributes page to make it easy to share your memories.