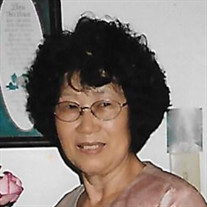 Sue (Han Young Hee) Buente, 79, of Kankakee, passed away Wednesday, March 10, 2021 at her home. She was born on March 20, 1941 in Usong, South Korea, the daughter of Han Jin Kap and Cho Heung Nam. She married Orlin Buente on April 13, 1966 in Seoul, South Korea. Sue worked at Gould Battery, Fesco, and Howard Johnson East Court. She was a hard worker and never turned down overtime. She attended Bonfield Evangelical United Methodist Church, where she was a member of Sunshine Circle. Sue loved working outside gardening and tending her flowers. She was a very good cook and made excellent Korean food, pies, and peanut butter cookies; she even canned her own vegetables. Sue is survived by her loving husband of 54 years, Orlin Buente, of Kankakee; one son and daughter-in-law, Wayne (Lala) Buente, of Honolulu, HI; one grandchild, Naydeen Buente; one brother, Han Wan Yong, of Daejeon, South Korea; one sister, Kye Hee Kim, of Georgia; one sister-in-law, Ardis (Allen) Messer, of Bonfield; two brothers-in-law, Owen Buente, of New Lenox and Harley (Carol) Buente, of Bonfield; dear niece, Lecia Geiger; dear nephew, Han Jeonhee; and several other nieces, nephews, and cousins. Sue was preceded in death by her parents; one son, Brian Buente; and two sisters, Han Ul Soon and Han Bok Soon. Visitation will be held from 1:00 pm until 4:00 pm on Sunday, March 14, 2021 at Clancy-Gernon-Hertz Funeral Home in Kankakee. The funeral service will be at 11:00 am on Monday, March 15, 2021 also at Clancy-Gernon-Hertz Funeral Home in Kankakee. Pastor Keith Blankenship will officiate the service. Please wear a mask and practice social distancing guidelines. Burial will follow at Maple Grove Cemetery in Bonfield. Memorials may be made to Bonfield Evangelical United Methodist Church or Uplifted Care.

The family of Sue Buente created this Life Tributes page to make it easy to share your memories.