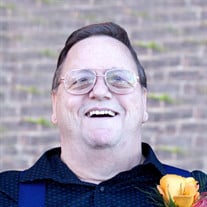 Terry Ray Higgins, 70, passed away unexpectedly in his home in Bradley, Illinois on April 4, 2021 (Easter Sunday). Terry was a graduate of Kankakee East Ridge, class of 1969, and went on to be a fabricator for CBI and BIMBA. Terry was a man full of love, humor, wisdom, and kindness. As a single father, Terry was the cool neighborhood dad to all of his son, Ryan's friends through the years. He was responsible for letting the kids get away with things that in this day and age would land them in jail. But they all made it through with a few good stories to look back on fondly. Terry loved cooking on the grill, and of all things, mowing his lawn. He enjoyed being outside and took many trips to the state park when his son was young. He enjoyed visiting his family in Texas many times over the years. Terry was an avid sci-fi and western lover, you could always catch him watching some crazy movie about aliens or an old western if you showed up unannounced. In recent years Terry had many health struggles but was always determined to come out the other side. Some would call him stubborn. He was, but it was his love for his family that kept him going. Terry's grandson Adam would come over on visits from Massachusetts and tell him all about his video games and what was happening in school. He loved the time he was able to spend with Adam when he was in town. Terry, Ryan, and Adam would all talk about the latest Star Wars or Star Trek movies. On one great visit in particular they were all able to go see The Force Awakens, marking Adam's first movie with his grandfather. One of Terry's best days in recent years was being able to see his son get married in the summer of 2018. Joined by many family and friends at the old Town Cinema, now The Majestic, Terry could not wipe the smile off his face that day, it was a memory for a lifetime. Terry was predeceased by his brother Frank Higgins of Texas. He is survived by his beloved sister Sharon and her husband Dave Lockner of Kankakee. Terry leaves behind his son Ryan, daughter-in-law Laura, and grandson Adam of Massachusetts. He will be missed by many family members and countless neighborhood friends. A celebration of life will occur in the summer of 2021.

Terry Ray Higgins, 70, passed away unexpectedly in his home in Bradley, Illinois on April 4, 2021 (Easter Sunday). Terry was a graduate of Kankakee East Ridge, class of 1969, and went on to be a fabricator for CBI and BIMBA. Terry was a man... View Obituary & Service Information

The family of Terry Ray Higgins created this Life Tributes page to make it easy to share your memories.

Terry Ray Higgins, 70, passed away unexpectedly in his home in...