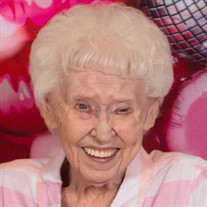 Venita Rose Webb, 89, of Manteno, better known as “Granny” to all who met her, passed away in the home she shared with her daughter and son-in-law, Thursday (Nov. 4, 2021) after a long illness. She was born May 1, 1932, in Du Quoin, one of 12 children born to Albert and Emma Lane Short. Venita married Elmer Lee Webb on Aug. 5, 1950, in Harrisburg. He preceded her in death June 20, 1996. Together, they had two daughters, Dixie Lee and Penny Lynn. They moved from Southern Illinois to Kankakee in 1965. Venita worked at a couple of nursing homes and then later worked for St. Mary’s Hospital until she retired. She loved playing with her grandkids and great-grandkids. Venita was a die-hard St. Louis Cardinals fan. She enjoyed watching any sports on TV, along with solving word search puzzles. Surviving are her daughter and son-in-law, Penny and Kevin Ward, of Manteno; two grandsons, Kevin Loss, of Florida and Craig (Jillian) Sommer, of Georgia; one granddaughter, Angela Sommer, of Bradley; and four great-grandchildren, Elijah, Jackson, Claudia and Emmalane Sommer; one sister, Clara Jones, of Harrisburg; and one sister-in-law, Romaine Short, of Harrisburg. She was also a grandmother to six foreign exchange students who spent time with the family, Magdalena Kopaniarski, Karin Langlois, Mariana Souza, Nicola Nardi, Sara Perez and Erno Bomberg. In addition to her husband, Elmer Lee Webb; she was preceded in death by her daughter, Dixie Loss; her parents, Albert and Emma Lane Short; brothers and sisters, Everett Short, Mabel Short, Eva Bowles, Mildred Leverett, Emma Mitchell, Albert Short, Alvin Short, Ruth Hildreth, Ruby Nolan and Claude Short. Visitation will be from 4 p.m. to 8 p.m. Monday, Nov. 8, at Clancy-Gernon-Hertz Funeral Home in Kankakee. A funeral service will be at 11 a.m. Tuesday, Nov. 9, also at the funeral home. Interment will follow in All Saints Cemetery, Bourbonnais. Memorials may be made to Uplifted Care Hospice, Bourbonnais.

The family of Venita Rose Webb created this Life Tributes page to make it easy to share your memories.