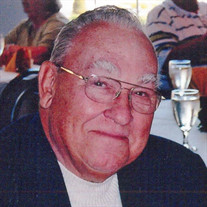 A joint funeral service for Bernie & Bonnie Lavoie will be held at 1 p.m. Wednesday, April 28, 2021 at the First Presbyterian Church in St. Anne. Rev. Mike Seed will officiate the service. Please wear a face mask and practice social distancing guidelines. Entombment will follow at Kankakee Memorial Gardens Mausoleum in Aroma Township. Bernard “Bernie” Lavoie, age 85, a lifetime resident of St. Anne, passed away Saturday, April 17, 2021 at Joliet Hospice. He was born June 14, 1935 in St. Anne to William & Josephine (Styck) Lavoie. Bernie married Bonnie Morrical in Chebanse on February 1, 1958. Bernie owned and operated his own excavation business until he ran for the Township Road Commissioner of St. Anne, a position he held for 32 years. He was on numerous village boards and organizations in his community throughout his lifetime. Bernie was a lifetime member of St. Anne Presbyterian Church, where he also served as an Elder and Trustee. He belonged to the American Legion, Township Officials of Illinois, and the V.A. Bernie was a veteran of the United States Army, where he served his country for two years in Germany. He traveled back to Germany on the 25th anniversary for a tour of his services. Bernie loved sports, especially the Chicago Bears and the St. Louis Cardinals. Surviving Bernie are one son, Terry (Karol) Lavoie of Bakersfield, CA; nephew, Craig (Debbie) Clement; niece, Cheryl Clement; and several cousins. Bernie was preceded in death by his parents; one son, Gene Alan Lavoie; and one sister, Rita Clement. Bonnie (Morrical) Lavoie, age 85, of St. Anne passed away, Monday, April 19, 2021 at Riverside Medical Center in Kankakee. She was born August 30, 1935 in Chebanse, the daughter of Merle & Alma (Brinkman) Morrical. Bonnie married Bernie Lavoie in Chebanse on February 1, 1958. He preceded her in death on April 17, 2021. Bonnie held numerous jobs in the medical field and worked part-time at the U.S. Postal Service. She retired from the Daily Journal. In retirement, Bonnie enjoyed decorating her home and yard. She was a member of the First Presbyterian Church in St. Anne. Bonnie attended both Chebanse Grade School and Chebanse High School. Surviving Bonnie are one son, Terry (Karol) Lavoie of Bakersfield, CA; one sister, Mary (John) Keigher of Frankfort; one brother, James “Jim” Morrical of Joliet; nieces, Lori Hoekstra and Vicki Blue; and nephews, and Steve Morrical and Jay Keigher, Bonnie is preceded in death by her loving husband of 63 years, Bernie Lavoie who passed away 2 days before her; her parents; one son, Gene Alan Lavoie; two brothers, Kenneth Morrical and Gerald Morrical; and one sister-in-law, Darlene Morrical. The family has requested no flowers. Memorials may be made to the First Presbyterian Church in St. Anne or St. Jude Children’s Research Hospital. Arrangements by Clancy-Gernon-Houk Funeral Home in St. Anne.

The family of Bernard "Bernie" Lavoie created this Life Tributes page to make it easy to share your memories.

A joint funeral service for Bernie &amp; Bonnie Lavoie will be held...