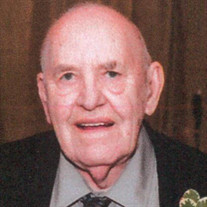 Charles A. “Chuck” Brinkman, age 86, of Bonfield passed away Friday, March 25, 2022 at his home. He was born February 14, 1936 in Kankakee, the son of Charles M. & Violet M. (Burling) Brinkman. Charles married Carolyn Bradley on September 28, 1957 at St. John United Church of Christ in Kankakee. Chuck worked for 28 years at David Bradley & Roper Corporation, eventually retiring from ZLB Behring (CSL Behring). He enjoyed doing carpenter work and wood working. Chuck enjoyed spending time with his family. In the early years he flew to visit family. Later he traveled in his RV to all 48 continental states, camping along the way. He especially enjoyed traveling to National and State Parks. Chuck was a member of the Bonfield Evangelical United Methodist Church. Surviving are his wife of 64 years, Carolyn Brinkman of Bonfield; one daughter, Christine Brinkman of Bonfield; five grandchildren, Rodney Ulm of Indianapolis,IN, Teri Ulm & Adam Mueblhausen of Indianapolis, IN, Nicole & James Lord of Clinton, Rob & Julie Brinkman of Charlotte, NC, and Steven Brinkman of Chicago; three great-grandchildren; one daughter-in-law, Barbara M. Brinkman of Indianapolis, IN; and many nieces and nephews. Chuck is preceded in death by his parents; one son, Charles H. Brinkman; one brother, Elmer Brinkman; and one sister, Adeline Nottke. Cremation rites have been accorded. A memorial visitation will be held from 9 a.m. until the time of the 11 a.m. memorial service on Friday, April 8, 2022 at Bonfield Evangelical United Methodist Church. Private family inurnment will be held at a later date at Bonfield Cemetery. In lieu of flowers, memorials may be made to Bonfield Evangelical United Methodist Church or the Donor’s Choice.

The family of Charles A. "Chuck" Brinkman created this Life Tributes page to make it easy to share your memories.