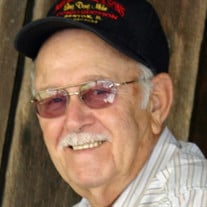 Clarence Grattan “Doc” Paris of Bourbonnais died Monday, February 14, 2022 at his home, surrounded by his loving family. Doc was retired from the Assembly Plant at Ford Motor Co in April, 2001. He was a member of Sheet Metal Local #265 & 551. He was born Oct 31, 1934 in Galatia, the son of Ivan S. and Bertha (Cannon) Paris. First and foremost, Doc loved the Lord and his life reflected this love. He deeply loved his family and enjoyed most when they were all together sharing a meal and conversation. He never met a stranger. Every new person he came across was just a friend he hadn’t met yet. He could converse with anyone, anywhere. Throughout his life, he had many interests that were all pursued with fervor: flying, fishing, camping, metal artwork, furniture building, and carpentry. The family is blessed with many things that are being used that were made with his own hands. He was a man that believed that, if someone built it, he could build it or make it as well. Formerly a member of two gospel singing groups, there was always a song in his heart and on his lips. Car trips were filled with full family singing performances. He was always singing but he loved to play the guitar and piano as well. A man of many talents, who used them for the glory of God, for the good of his family and friends whenever they needed them. Surviving is the love of his life, his wife, Phyllis Webb Paris whom he married in September 10, 1955 in Kankakee. They were happily married for 66 years. He reminded her of his love regularly, a love that still looked as young as when they met. Surviving Doc are one daughter, Pamela K. Paris Regel (R. Mark Regel); local grandchildren, Ian (Alison) Regel and Kaeli (Jace) Salm and six other grandchildren residing elsewhere; ten great-grandchildren; one sister, Doris Paris Emery of FL; many nieces and nephews; and lifelong childhood friend of 72 years, Juel “Slim” Mandrell of Benton, IL Preceding him in death are his parents; six brothers; one sister; and one son, C. Kevin Paris, who died in 2011. Cremation rites have been accorded. A memorial visitation will be held from 1 p.m. until the time of the 3 p.m. memorial service on Monday, February 21, 2022 at Clancy-Gernon Funeral Home in Bourbonnais. Pastor Sam Goebel, of River Valley Christian Fellowship, will officiate the service. Memorials may be made to the family wishes.

Clarence Grattan &#8220;Doc&#8221; Paris of Bourbonnais died Monday, February 14, 2022 at his home, surrounded by his loving family. Doc was retired from the Assembly Plant at Ford Motor Co in April, 2001. He was a member of Sheet Metal Local... View Obituary & Service Information

The family of Clarence Grattan "Doc" Paris created this Life Tributes page to make it easy to share your memories.