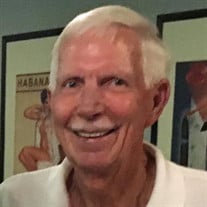 David M. Welker, age 76, of Bourbonnais, passed away Thursday, August 19, 2021 at his home. He was born December 31, 1944 in Kankakee, the son of Donald & Mabel Gwin Welker. David married Linda Savoie on July 3, 1981. She preceded him in death on January 28, 2017. David was a longtime sales manager for Kankakee Valves. He was an avid golfer and enjoyed bowling, having coffee with friends, and spending time with his children and grandchildren. Surviving are two sons, James & Debbie Welker of Marengo and Todd Higgins of Rockford; two daughters, Tammy & Jeff Rehberg of Mercer, WI and Shannon & Andrew Chomiczewski of Winfield; one sister, Julie Pippen of Florida; three brothers, Robert & Bonnie Welker of Indiana, Steven Welker of California, and Jeff Welker formerly of Kankakee; six grandchildren, Ashley (Dan) Andrew of Schaumburg, Brad Rehberg of Marengo, Jeff (Lauren) Fox of Tampa, FL, Jordan (Kyle) Booth of Savage, MN, Cody Welker of Marengo and Cheyenne Welker of Marengo; four great-grandchildren, Archer Fox of Tampa, FL, Jaxon Fox of Tampa, FL, Ella Andrew of Schaumburg, and Jacob Andrew of Schaumburg; and one brother-in-law and sister-in-law, Tom & Marilyn Savoie of Bourbonnais. In addition to his wife, David is preceded in death by his parents; one daughter, Trenny Lowey; one brother, Richard Welker; and his first wife, Carol Welker. Cremation rites have been accorded. A memorial visitation will be held from 4:00 p.m. until the 7:00 p.m. Celebration of Life on Wednesday, August 25, 2021 at Clancy-Gernon Funeral Home in Bourbonnais. Memorials may be made to Alzheimer’s Association or Diabetes Association.

The family of David M. Welker created this Life Tributes page to make it easy to share your memories.