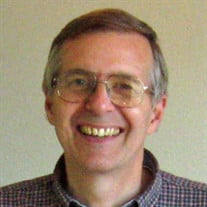 Dennis Carl Baldridge, age 67, of Scottsdale, AZ passed away Saturday, December 4, 2021 in Scottsdale, AZ. He was born November 25, 1954 in Decatur, the son of Everett & Juanita (Crook) Baldridge. Dennis married Jane Friske on May 28, 1976 in Broadview. Dennis was a Broadcast Engineer. He founded, built, and managed an FM radio station from 2013-2020 (WCNP-FM 89.5 in Reedsburg, WI). Some of his hobbies included: Amateur Radio (Extra-Class License), gardening, and collecting antique cars (1938 Packard & 1929 Model A Ford). Dennis was a member of the Society of Broadcast Engineers, where he served as Chairman of Chapter 24 in 2008. He was an SBE Educator of the Year in 2013 and received 5 SBE Certifications. Dennis was a member of the Kankakee First Church of the Nazarene from 1965-1993. He was currently a member of the Redeemer Reformed Church in Scottsdale, AZ. Surviving are his wife, Jane Baldridge of Scottsdale, AZ; three sons and three daughters-in-law, Timothy & Lydia Baldridge of Highlands Ranch, CO, Mark & Kate Baldridge of Cedar Rapids, IA, and Ryan & Abbie Baldridge of Jacksonville, FL; two daughters and one son-in-law, Jana & Chris Tingom of Scottsdale, AZ and Shelley Baldridge of Chicago; twelve grandchildren, Titus, Kailey, Asher, Micah, Ariana, June, Evelyn, Fern, Andrew, Emily, Owen, and Claire; one sister, Sandy Jewell of Ft. Wayne, IN; and one brother and sister-in-law, Terry & Linda Baldridge of Olathe, KS. Dennis is preceded in death by his parents and grandparents. Visitation will be held from 2-6 p.m. Sunday, December 12, 2021 at Clancy-Gernon Funeral Home in Bourbonnais. A funeral service will be held at 10 a.m. on Monday, December 13, 2021, also at the funeral home. Ron Fruit will officiate the service. Interment will follow at Kankakee Memorial Gardens in Aroma Township. In lieu of flowers, memorials may be made WCNP radio (classicallychristian.org).

The family of Dennis Carl Baldridge created this Life Tributes page to make it easy to share your memories.