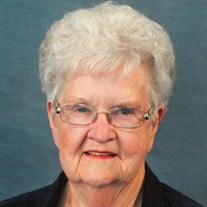 Doralena B. “Dora” Mann, age 93, of St. Anne passed away Tuesday, August 31, 2021 at Harvest View Senior Living in Herscher. She was born December 22, 1927 in Kankakee, the daughter of Henry & Bertha (Flint) Bisping. Dora married Clayton Mann on October 6, 1946 at Deselm Methodist Church. He preceded her in death on February 23, 1998. Dora was a bookkeeper for 30 years at F.S. and Chebanse Ag. She was a Sunday School teacher. Dora loved traveling to the Northeast with her husband. She loved the outdoors and animals, especially Beagles. Dora was an avid reader and was fond of John Wayne, Lauren Green, and country music, especially George Strait. She was famous for her chicken pie at the Mann family reunions and grew Indian corn and from the profits, she would travel. She loved decorating for Christmas, and all seasons. Dora’s grandchildren were her pride and joy. She was a member of the First Methodist Church of Momence. Surviving are two sons and two daughters-in-law, James & Michelle Mann of Herscher and Verle & Barbara Mann of St. Anne; one daughter and son-in-law, Carol & Stanley Schoettmer of Greensburg, IN; four grandchildren, Neil Mann, Craig Mann, Kristal (Brett) Warhurst, and Sara (Rob) Dickey; four great-grandchildren, Ellis Dickey, Karlea Dickey, Toby Warhurst, and Lexi Warhurst; and many nieces and nephews. In addition to her husband, Clayton Mann, Dora is preceded in death by her parents and her siblings, Wayne (Helen) Bisping, Gordon (Ruby) Bisping, Virgil (Marie) Bisping, and Daryl (Margarette) Bisping. Visitation will be held from 9 a.m. until the time of the 11 a.m. funeral service on Friday, September 3, 2021 at Clancy-Gernon-Hertz Funeral Home in Kankakee. Interment will follow at Blooms Grove Cemetery in Manteno. Memorials may be made to the Aroma Fire Department.

The family of Doralena B. "Dora" Mann created this Life Tributes page to make it easy to share your memories.