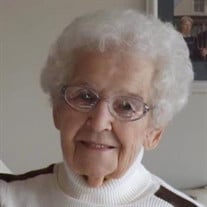 Eunice Dykstra, age 101, of Randleman, NC, formerly of St. Anne, passed away Tuesday, August 31, 2021 at her daughter’s home in Randleman, NC. She was born April 5, 1920 in Papineau, the daughter of Charles & Gladys (Scott) Allain. Eunice married Robert Dykstra on April 14, 1938 in St. Anne. He preceded her in death on January 9, 2015. Eunice was a bookkeeper for McKibben Engineering Corporation. She was a Supervisor for St. Anne Township for 16 years. Eunice served as Treasurer for the Board of Senior Housing Limited Partnership and a volunteer for the Salvation Army and Meals on Wheels for many years. She enjoyed handwork, reading, playing the organ, and playing table games with family and friends. Eunice was a member of the First Baptist Church in St. Anne where she also played the organ for services, weddings, and funerals. She had also taught Sunday School for many years. Surviving are two sons and two daughters-in-law, Duane & Sandra Dykstra of Aroma Park and Mark & Kimberly Dykstra of Kankakee; three daughters and one son-in-law, Carol Keller of Bradley, Wanda & Forrest Zander of Carol Stream, and Donita Odom of Randleman, NC; 12 grandchildren; numerous great-grandchildren and great-great grandchildren. In addition to her husband, Eunice is preceded in death by her parents; five grandchildren, Stephen Reid, Heidi Reid, Jacqueline Keller, Robert Keller, and Connie Clevenger; one brother and sister-in-law, Kenneth & Darlene Allain; one sister, Lola Peterson; two brothers-in-law, Joe DeYoung and Paul Peterson; two sons-in-law, James Keller and Richard Reid; and one great-granddaughter, Angela Clevenger. Visitation will be held from 9:00 a.m. until the 10:30 a.m. funeral service on Thursday, September 9, 2021 at Clancy-Gernon-Houk Funeral Home in St. Anne. Interment will follow at Kankakee Memorial Gardens in Aroma Township. Memorials may be made to the Bible Witness Camp in St. Anne.

The family of Eunice Dykstra created this Life Tributes page to make it easy to share your memories.