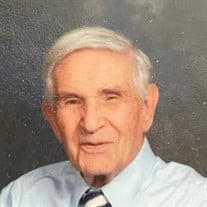 George Kondourajian, age 88,of Bradley, passed away on Sunday, April 11, 2021 at his home. He was born April 30, 1932 in Beirut Lebanon, the son of Avedis and Oski (Bedrosian) Kondourajian. George married Mary Ternakian on August 19, 1961 at the Church of the Nazarene in Beirut, Lebanon. George had several professions which included Pastor, tailor and jeweler. He was a graduate of Olivet Nazarene University. George was very active in his church as an usher and greeter. He enjoyed gardening , was a great chef, and most of all enjoyed spending time with his family. George was a Nazarene Pastor in Lebanon and the United States. In George’s later years, he owned and operated International Jewelers in Meadowview. George was a member of the College Church of the Nazarene. Surviving are his wife Mary of nearly sixty years; one son and daughter-in-law, Michael (Cheryl) Kondourajian of West Chicago; two daughters and sons-in-law, Rhoda (Jim) Hair of Bourbonnais, Rima (Michael) Murphy of Frankfort; ten grandchildren, Sydney, Meeghan, Zachary, Grant, Grace, Kate, Thomas, Isabelle, Lauren, Lucy; three great grandchildren, Quinn, Reese, Sloane; one sister, Esther Schmidt, Toronto, Canada; several nieces, nephews, and cousins. Preceding George in death are his parents; three sisters, Mary, Rosine and Lucine. Visitation will be held from 10:00 a.m. until the 11:00 a.m. funeral service on Saturday, April 17, 2021 at College Church of the Nazarene, Bourbonnais. Please wear a face mask and practice social distancing guidelines. Pastor Mark Quanstrom will officiate. Interment will follow at Mound Grove Cemetery, Kankakee. In lieu of flowers, memorials may be made to the College Church of the Nazarene Scholarship Fund for Children’s Summer Camp (ONU Bourbonnais Campus). Please sign his guestbook at clancygernon.com Arrangements are by Clancy-Gernon Funeral Home, Bourbonnais.

George Kondourajian, age 88,of Bradley, passed away on Sunday, April 11, 2021 at his home. He was born April 30, 1932 in Beirut Lebanon, the son of Avedis and Oski (Bedrosian) Kondourajian. George married Mary Ternakian on August 19, 1961... View Obituary & Service Information

The family of George Kondourajian created this Life Tributes page to make it easy to share your memories.

George Kondourajian, age 88,of Bradley, passed away on Sunday,...