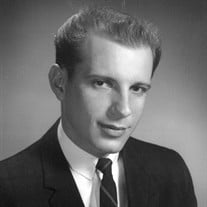 George Michael Vukovich, Sr. July 5, 1936 – August 30, 2021 George M. Vukovich, Sr. 85, of Manteno, Illinois, went to be with the Lord on Monday, August 30, 2021 at Riverside Hospital in Kankakee, Illinois after an extended illness. Born on July 5, 1936 in New Castle, Pa he was a life-long resident of West Pittsburg and New Castle areas until relocating to Manteno during 2021. George married the "love of his life", the former Janet Irene Mosley, on 1 October 1960. The two remained inseparable and dedicated their lives to one another until his passing. He is the son of the late F.J. “Lobby” and Violet Vukovich. George was a member of the United States Armed Forces and served in the Army from 1958-1959. After serving our country he was employed with Matthews Conveyor Systems, Interstate Construction, and worked in the Office of the Auditor of the Commonwealth of Pennsylvania, until his retirement. He also owned his own auto-body repair shop as this was a true passion of his! He was a life-time member of the Croatian Lodge, member of Holy Cross Catholic Church, and St. Camillus Church as well. A loving husband, father, grandfather, great grandfather, brother, brother-in-law, uncle, cousin, father-in-law and friend, he is survived by his wife, Janet of Manteno Illinois; son George, Jr. (DeAnn) Alliance, Oh; daughter Karen (Steve Simcak) Mentor, Oh; daughter Diane, Bloomington, Il; daughter Patty (Tony Hemker) Manteno, Il; son Dan, New Castle, Pa; 17 grandchildren; 22 great grandchildren; sister Lillian Terreri, Pittsburgh, Pa; sister Dolly Vukovich-Mort, New Castle, Pa; sister Maryann (Russ Freed), Neshannock, Pa. His greatest joy was his family! He cherished every moment he had with his grandchildren in particular. He loved hearing their stories and having his special “papa-time” with each! In addition to his parents, George was preceded in death by his infant brother (Carl); nephew and godson, Trooper Rusty Freed; grandson, Steven Simcak; in laws, James C. and Wanda Mosley; brother in law, James E. Mosley; and nephew Tim Mosley. A private memorial Mass for George will be held at The Maternity of the Blessed Virgin Mary Catholic Church in Bourbonnais, Illinois on 11 September, 2021. Arrangements by Clancy-Gernon Funeral Home in Manteno.

The family of George Michael Vukovich Sr. created this Life Tributes page to make it easy to share your memories.