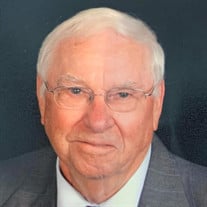 Gerald “Jerry” Chamness, age 83 of Bourbonnais passed away Tuesday, January 26, 2021 at Riverside Medical Center in Kankakee. He was born October 30, 1937 in Bradley, the son of Perry & Anna (Skube) Chamness. Gerald married Frieda Hunger on February 20, 1960 at St. Patrick Catholic Church in Kankakee. Jerry retired from General Foods/Quaker Oats, after 30 years. Most of those years he was a Production Supervisor and with the Supply Chain Group as a Commodity Coordinator. Jerry was a veteran of the United States Navy, Aviation Branch. After being honorably discharged, he later went to Flight School and received a pilot’s license and was a former member of the Kankakee Valley Pilots Association. Jerry was a member of the Moose Lodge. He enjoyed flying, golfing, bowling, doing yard work, and loved to travel. Jerry was a parishioner of St. Joseph Catholic Church in Bradley. Surviving are his wife, Frieda Chamness of Bourbonnais; one daughter and son-in-law, Debra “Deb” & Donald Rantz of Beaverville; one son and daughter-in-law, Robert & Michelle Chamness of Lawton-Fort Sill, OK; two grandchildren, Sara Souligne and Katlyn Chamness; and two great-grandchildren, Kylee Souligne and Joseph Depoister. Jerry is preceded in death by his parents; three brothers, Francis “Foo” Chamness, Perry Chamness, and Delbert Chamness; one sister, Maxine Cassidy; one brother-in-law, Harold Cassity; and two sisters-in-law, Henrietta Chamness and Oletha Chamness. Visitation will be held from 9 a.m. until 11:15 a.m. on Monday, February 1, 2021 at Clancy-Gernon Funeral Home in Bourbonnais. A funeral Mass will be held at 11:30 a.m. on Monday, February 1, 2021 at St. Joseph Catholic Church in Bradley. Due to the COVID 19 pandemic, face masks and social distancing will be required. Burial will follow at Abraham Lincoln National Cemetery in Elwood. In lieu of flowers, memorials may be made to St. Jude Children’s Research Hospital.

The family of Gerald "Jerry" Chamness created this Life Tributes page to make it easy to share your memories.