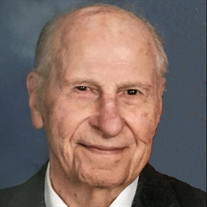 Ira F. Lawless, age 101, of Kankakee passed away Thursday, October 7, 2021 at Riverside Senior Living in Bourbonnais. He was born October 24, 1919 in Reddick, the son of John & Mabel (Tavares) Lawless. Ira married Catherine D. Ortman on July 28, 1945 at St. Patrick Catholic Church in Kankakee. She preceded him in death on September 11, 2020. Ira worked in Human Resources, retiring from Henkel Corporation (General Mills) after 30 years. He enjoyed golfing, hunting, woodworking, and remodeling. He attended Reddick Schools. Ira was a veteran of the United States Army Air Corp, having served during WWII. He was a parishioner of St. Patrick Catholic Church in Kankakee. Surviving are one son and daughter-in-law, James & Lynne Anne Lawless of McCall, ID; one daughter, Marilyn McCall of West Newbury, MA; four grandchildren; nine great-grandchildren; and one sister-in-law, Marianne Lawless of Bourbonnais. In addition to his wife, Catherine Lawless, Ira is preceded in death by his parents; three brothers, Marion, Lyle, and James V.; three sisters, Lorraine, Loretta, and Elaine; and one son-in-law, Bill McCall. Visitation will be held from 9 a.m. until 10:45 a.m. on Monday, October 11, 2021 at Clancy-Gernon-Hertz Funeral Home in Kankakee. A funeral Mass will be held at 11 a.m. at St. Patrick Catholic Church in Kankakee. Rev. John Peeters will celebrate the Mass. Entombment will follow at Mt. Calvary Mausoleum in Kankakee. Memorials may be made to Illinois Veterans Home at Manteno.

The family of Ira F. Lawless created this Life Tributes page to make it easy to share your memories.