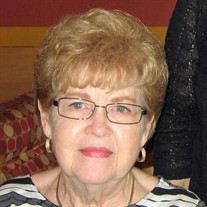 Iris Eileen Dionne (nee Case), age 84, of Peoria, passed away May 15, 2021, at OSF Saint Francis Medical Center in Peoria. She was born March 12, 1937, in Chandlerville, the daughter of Theodore Roosevelt Case and Ruby Rose (Davis) Case. Iris was united in marriage on April 21, 1957 at Maternity B.V.M. Catholic Church in Bourbonnais, to her high school sweetheart, Roland Lawrence Dionne. They met at Bradley-Bourbonnais High School, where she graduated in 1955. They lived in several cities throughout their 56 years of marriage including Dwight, Chatsworth, Naperville, Waukesha, Wis., and lastly, Peoria. Iris was an avid gardener and loved spending time outside in her flowerbeds. It is often said she would much rather be outside in her garden and flowerbeds than inside doing housework or cooking. She loved visiting the local resale/antique shops for bargains. Iris also enjoyed buying clothing for herself and family. Her neighbor commented that "your mother always looked good even when doing yard work." She was very particular about the way she looked and always took pride in her appearance. Iris worked mainly as an administrative assistant throughout her working career starting out with Beaupre Insurance Agency in Bradley, followed by Farmers Insurance in Aurora, and lastly with Schillerstrom Attorney at Law in Naperville, in the 80’s. She also worked at Fox Center for disabled children in Dwight, when her children were young. She then moved with her husband, Roland, who worked for Nabisco, to Waukesha, Wis., where she eventually retired from the workforce. Iris and Roland moved to Peoria in 1984 with a transfer from Nabisco and she lived in the same home until her recent death. She was a devoted wife to Roland until his death in 2013; and loving mother to Rhonda (David) Spoula, Jeffrey Dionne (Leighann), Randall Dionne (Marian) and Lori Anne Dionne, deceased; a doting grandmother to six grandchildren, Michael Spoula, Taylor Spoula, Dana Kraszczynski (Leszek), Emma Dionne, Von Dionne and Evon Dionne; five brothers, Ivan Case, deceased, Melvin Case (Pat), Eldon Case, Evan Case (Sherry) and Paul Case (Ginger); a special sister, Teresa Case Bristol; as well as many nieces and nephews. In addition to her husband, Roland L. Dionne; she was preceded in death by a daughter, Lori Ann Dionne; her parents, Theodore R. Case and Ruby R. Case (Davis); and one brother, Ivan Case. A memorial visitation with the greeting of family and friends, will be from 11 a.m. Saturday, July 17 until the 11:30 a.m. memorial service in All Saints Mausoleum Chapel, 1839 W. State Rt. 102, Bourbonnais. Following the memorial, a private family lunch will be provided at Brickstone Brewery, 557 Wm. Latham Sr. Drive, Bourbonnais. In lieu of flowers or plants, the children of Iris Dionne request you donate to any of these organization’s to continue research into PV or heart valve disease in honor of their mother such as: (MPN) Myeloproliferative Neoplasms Research Foundation, Leukemia and Lymphoma Society, and The American Heart Association/Go Red for Women.

The family of Iris Eileen Dionne created this Life Tributes page to make it easy to share your memories.