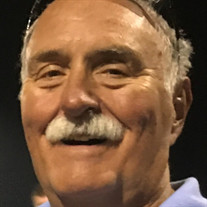 On Sunday, December 13, 2020 J. Edward Schwenke, loving husband, father, and papa, passed away at the age of 75. He was born on September 19, 1945 in Chicago, the son of Richard & Leota Schwenke. Ed was a proud graduate of Northwestern University with a degree in Physical Therapy. After graduation, he served his country as a Physical Therapist in the United States Army treating many of the wounded veterans coming home from Vietnam. Ed came to Kankakee in the early 1970’s as one of the first physical therapists in our area. He ran the sports medicine clinic at the hospital helping many young athletes. Ed was also the athletic trainer at Bishop McNamara for many years. He was the best coach and fan to his nine grandchildren. Ed lived a life that made a difference, full of empathy and compassion. Surviving are his wife, Cathy (Zinanni) Schwenke of Bourbonnais; two children, Christina (Mike) O’Connor of Bourbonnais and Doug (Stephanie) Schwenke of Colorado Springs, CO; one daughter-in-law, Barbara Schwenke-Waken of Ladera Ranch, CA; one brother, Bob (Linda) Schwenke of Jamestown, OH; one sister, Janet Schwenke of Kansas City, KS; two brothers-in-law and two sisters-in-law, Joe & Sue Zinanni and Rich & Jane Zinanni, all of Bourbonnais; nine grandchildren, Megan O’Connor, Mallory O’Connor, Michael O’Connor, Drake Schwenke, Caleb Schwenke, DJ Schwenke, Logan Schwenke, Adin Schwenke, and Ellie Schwenke. He was preceded in death by his son, Matthew Schwenke; his parents; and his father-in-law and mother-in-law, Mario & Elaine Zinnani. Due to the COVID 19 pandemic, private services will be held. Inurnment will be at Abraham Lincoln National Cemetery in Elwood. Memorials may be made to the Juvenile Diabetes Research Foundation. Arrangements by Clancy-Gernon Funeral Home in Bourbonnais.

On Sunday, December 13, 2020 J. Edward Schwenke, loving husband, father, and papa, passed away at the age of 75. He was born on September 19, 1945 in Chicago, the son of Richard & Leota Schwenke. Ed was a proud graduate of Northwestern University... View Obituary & Service Information

The family of J. Edward Schwenke created this Life Tributes page to make it easy to share your memories.