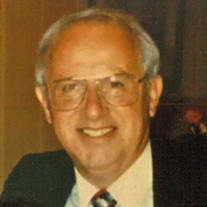 James “Jim” G. Sprimont, 86, of St. Anne, Illinois, entered a new life on Saturday December 4, 2021 at his home. He was born October 22, 1935, in Kankakee, the son of Gerald C. and Ormella M. (Nourie) Sprimont. James married Carol A. O’Connor on June 20, 1959 at St. Teresa Catholic Church in Kankakee. James was a 1953 graduate of St. Anne High School in St. Anne, Illinois. In high school, he was on the basketball team and sang choir. After graduating high school, James attended Purdue University. During his time there, he was on the Glee Club and also played softball. After attending Purdue University, James enlisted in the United States Army where he was stationed in Heidelberg, Germany. During his time in the Army, James served as security analyst. Upon returning from the army, James enrolled in the Marycrest Business College where he graduated with a business degree. After graduating in 1958, he began working in the family business, Sprimont Insurance Agency Inc, of St. Anne Illinois. James eventually retired from the insurance business at the age of 72. He was an active parishioner of St. Teresa Catholic Church and was a member of the church choir and also served on the school board. James was an avid bowler in the St. Anne bowling league. James also enjoyed hunting, fishing and playing cards in his free time and was a die hard Chicago Bears fan. He, along with Carol, his wife, traveled extensively and loved spending time with their grandchildren. James and Carol also enjoyed dancing and belonged to the Quadrille club. Surviving are his two sons and one daughter-in-law, James “Jay” and Connie Sprimont, of Dubuque, Iowa, and Jon Sprimont, of St. Anne; one daughter, Jill Sprimont, of Puerto Penasco Sonora, Mexico; nine grandchildren, Dino (Shayla) Maglaris, Brennen Sprimont, Noah Sprimont, Hailee Sprimont, Connor (Kayla) Sprimont, Zoe Sprimont, Keely Sprimont, Austin Tiesenga and Hannah Tiesenga; four great-grandchildren, Haiven, Ryatt, Gauge and Coulson; one sister-in-law, Mary Margaret Kelch, of Bourbonnais; one sister-in-law, Maureen O’Connor, of Bourbonnais; and several nieces and nephews. Preceding him in death were his wife Carol A. Sprimont, his parents Gerald C. & Ormella Sprimont; his brother, Bob Sprimont; sister-in -law Barb Sprimont and brothers-in-law, Dick Kelch and Thomas O’Connor. Visitation will be from 4 p.m. to 7 p.m. Friday, Dec 10th, at Clancy-Gernon Funeral Home in Bourbonnais. A funeral Mass will be at 10 a.m. Saturday, Dec. 11th, at St. Rose Chapel, Kankakee. Entombment will follow in All Saints Mausoleum, Bourbonnais. Memorials may be made to the Alzheimer’s Association.

The family of James "Jim" Sprimont created this Life Tributes page to make it easy to share your memories.