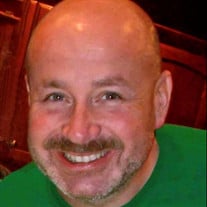 Keith Ronald Ballantine, age 53, of Chebanse passed away Thursday, February 24, 2022 at his home, surrounded by his family. He was born January 21, 1969 in Harvey, the son of Kenneth & Joan (Gallagher) Ballantine. He married Deanna Culver on July 21, 2000 in Palos Hills. Keith was a licensed massage therapist. He was a loving father, husband, brother, and son. Keith was a friend to all. He had a smile that lit the room up. Keith was an avid Chicago sports fan, never missing a Chicago Bears game. He had a love for music. You could always catch him at rock n’ roll concerts in Tinley Park. Keith had a passion for massage therapy and had a touch that was healing. He loved animals and was a huge dog person. He was the comedian and loved making people laugh. Keith’s passing leaves a huge hole in everyone’s heart. Surviving are his wife of almost 22 years, Deanna Ballantine of Chebanse; one daughter, Allison Ballantine of Chebanse; two sisters, Meg & Jaime DeLeon of San Antonio, TX and Michelle & Tom Child of Gainesville, GA; two brothers, Kenneth Ballantine and Kevin Ballantine, both of San Antonio, TX; two special nieces, Abigail Child and Madison Child; as well as many other loving nieces, nephews, cousins, aunts, and uncles. Keith is preceded in death by his parents; his grandparents, Mae Ballantine, Roy Ballantine, and Margaret Axelson; and one niece, Nicole Garcia. Visitation will be held from 2-7 p.m. on Monday, February 28, 2022 at Clancy-Gernon Funeral Home in Bourbonnais. An additional visitation will be held from 10 a.m. until the time of the 11 a.m. funeral service on Tuesday, March 1, 2022, also at the funeral home. Rev. Karl Koeppen will officiate the service. Cremation rites will be accorded following the service. Memorials may be made to P.A.W.S. of Tinley Park.

Keith Ronald Ballantine, age 53, of Chebanse passed away Thursday, February 24, 2022 at his home, surrounded by his family. He was born January 21, 1969 in Harvey, the son of Kenneth & Joan (Gallagher) Ballantine. He married Deanna Culver on... View Obituary & Service Information

The family of Keith Ronald Ballantine created this Life Tributes page to make it easy to share your memories.