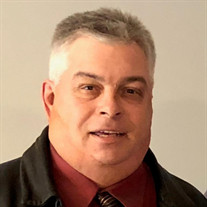 Kelly R. Johnson, age 55, of Kankakee, passed away Wednesday, October 6, 2021 at Riverside Medical Center in Kankakee following a short bout with Cancer. He was born August 29, 1966 in Kankakee, the son of Terry D. & Gerilynn Froidcoeur Johnson. Kelly married Amy Melvin in December of 1995 in Streator. Beginning at a young age, Kelly was always passionate about playing sports and excelled through his hard work and determination. He played for the Lion’s Little League and Elk's Pony League which he volunteered as a coach later in life. He played for the Azzarelli Colts Football team before being injured at the age of 10. Football has always been his favorite sport to participate in and watch with friends and family. During high school he joined the golf team enjoying success in that and in the fact that he was self-taught. Earning a golf scholarship, Kelly attended Illinois State University and pledged Delta Chi. In his early 20's he participated in the Prairie State Volleyball league for the State of Illinois. As an adult, he enjoyed playing ball with the Ultimate Sin softball team. Kelly belonged to bowling leagues and pool leagues which he enjoyed immensely not only for the sport of it but getting out and socializing with his friends. Kelly attended Kankakee High School and was the first graduating class after Westview and Eastridge combined. Kelly had worked at Blatchford’s in Frankfort and Rohm & Haas (which later became Dow Chemical). Later, he sold insurance through Country Financial. His last job was working at BASF (Henkel) which recently became Kensing. In his spare time, he enjoyed a good game of chess, which he enthusiastically shared with his sons and family members who wished to learn. The love for his family and friends knew no bounds. If anyone ever needed help whether it be physical labors or just sitting and talking, he was willing to make the time. Kelly was involved with the area Jaycee’s through which he met his future wife, Amy. He co-chaired the Air Show, assisted with the haunted house, and helped at the Homes on Parade when it was held in Bourbonnais. When Jeffers Park was being remodeled and built, Kelly was very happy to lend a hand in creating a new play space for the kids of the community. He was an active member of the Aroma Park Boat Club and enjoyed boating with friends on the Kankakee River. He was an avid Bears football fan, along with supporting the Chicago White Sox and Blackhawks. He supported several organizations, especially those that his boys were involved including: the Brawlers Wrestling Team, Knights of Columbus Baseball Team, St. Joseph Catholic School and Bishop McNamara High School. No matter where the boys played, he was there pacing and providing encouragement for the entire team. Kelly will be remembered as spirited and feisty as he persevered through all life struggles with strength and determination. He knew no strangers and made friends wherever he went. He spoke his mind and would welcome debates. Kelly had a great sense of humor and was sarcastic and witty. Kelly instilled a strong work ethic in his sons through his example. Surviving are his wife, Amy Johnson of Kankakee; two sons, Lucas Johnson of Kankakee and Logan Johnson of Kankakee; his father, Terry D. Johnson of Kankakee; and his sister, Jennifer Johnson of Kankakee. Kelly is preceded in death by his mother and maternal/paternal grandparents. Visitation will be held 2:00 p.m. – 6:00 p.m. Sunday, October 10, 2021 at Clancy-Gernon-Hertz Funeral Home in Kankakee. Funeral Mass will be celebrated at 10:00 a.m. Monday, October 11, 2021 at St. John Paul II – West Campus in Kankakee. Interment will follow at All Saints Cemetery in Bourbonnais. Monetary donations may be made to support Burn victims to a foundation designated by family.

The family of Kelly R. Johnson created this Life Tributes page to make it easy to share your memories.