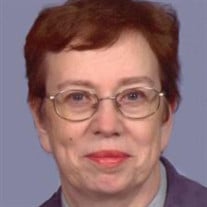 Loretto Sugrue Golden Cowhig, 74, of Kankakee, died Friday (October 1, 2021) at Riverside Medical Center. She was born April 6, 1947 in St. Louis, MO, the youngest child of James Golden and Virginia Sugrue Golden. Loretto received a bachelor’s degree from St. Louis University and a master’s degree from the University of Virginia, where she met her husband, Bruce. They were married in 1972. The Cowhigs moved to Kankakee in 1982, and Loretto joined the League of Women Voters of Kankakee County. She was a frequent moderator of candidate debates hosted by the League. Until March 2021, Loretto was a community planner with AgeGuide (formerly the Northeastern Illinois Area Agency on Aging), a role she had held since 1984. In recent years, she had focused on Medicare counseling; she was a certified SHIP counselor who helped seniors and their families navigate the Medicare enrollment process. Loretto was a skilled baker who for decades passed out homemade cookies to trick-or-treaters at the family’s Riverview home. Friends anticipated St. Patrick’s Day, because it meant Loretto’s annual gift of Irish soda bread, usually still warm from the oven. Her final act of baking was a cake for an event at St. Patrick’s Catholic Church, where she had been a parishioner for 39 years. She served there as a Eucharistic minister and lector and had served on the parish council. Loretto was a voracious reader, often in the middle of several books at a time. She especially loved the works of Jane Austen and probably could have recited passages from Pride & Prejudice from memory. Loretto was a frequent tour guide at the B. Harley Bradley House in Riverview, a restored Frank Lloyd Wright home. For many years she was a member and chair of the City of Kankakee Planning Board. Survivors include her husband, Bruce Cowhig; sister, Marion Curtis (George) of Denver, CO; daughter, Marian Cowhig Owen (David) of Charlotte, NC; son, Neil Cowhig (Kelly) of Plymouth, WI; and grandchildren, William Owen, Cora Cowhig and Gus Cowhig. She was preceded in death by her parents; sister, Virginia Schnarr; and brother, James Golden. Visitation will be Friday from 4 to 8 p.m. at Clancy-Gernon-Hertz Funeral Home in Kankakee. A funeral Mass will be celebrated Saturday, October 9, at 10 a.m. at St. Patrick Catholic Church in Kankakee. Memorials may be made to Wright in Kankakee or to her beloved alma mater, Nerinx Hall High School in Webster Groves, MO. In honor of this quiet woman who worked hard and loved abundantly, the family asks that you register to vote and visit your local library.

The family of Loretto Sugrue Golden Cowhig created this Life Tributes page to make it easy to share your memories.