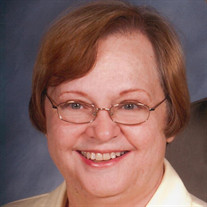 Marjorie Ann (Dilday) Legris, 74, now rests in eternal peace. She passed from this life on February 8, 2022, in Bourbonnais, Illinois. Margie retired from US West Communications (the telephone company) in 1996 after 31 years of service. After moving from Arizona back to Illinois, she worked at “Love Store” a job that she truly enjoyed. In retirement, she enjoyed her hobbies of reading, shopping and spending time with her family, especially being ‘Gobby’ for her great nieces and nephews. Marjorie has been a near lifelong member of St. Paul’s Lutheran Church, she was baptized, confirmed, and married there. Later she taught Sunday School and was part of the alter guild. Michael Paul Legris took her hand in marriage 55 years on New Year's Eve after only one month of courtship. They have two daughters, Amy (Larry) Newton of Coal City, IN and Amanda (Tim Petrusak) of Bradley, IL. Mrs. Legris is survived by her loving husband, adoring daughters and grandchildren, Tom Bedway, Kaeli (Sam) Jones, Elijah Newton, Lyla Petrusak. Great Grandchildren, Braeli, Harrison & Wylee Jones. Extended grandchildren, James (Ashley)Newton and Aja Newton, great grandchildren, Peyton, Declan, Knox, Hunter and Jonathan. Also, her brothers, Russell (Shari) Dilday, Stanley (Elizabeth) Dilday and George Dilday, with many nieces and nephews. Marjorie’s parents, Ralph and Juanita Dilday preceded her in death. Cremation rites have been accorded. A memorial visitation will be held from 10 a.m. until the time of the 11:30 a.m. memorial service on Saturday, February 12, 2022 at St. Paul’s Lutheran Church on Merchant Street in Kankakee. Memorials may be made to the family wishes. Arrangements by Clancy-Gernon Funeral Home in Bourbonnais.

Marjorie Ann (Dilday) Legris, 74, now rests in eternal peace. She passed from this life on February 8, 2022, in Bourbonnais, Illinois. Margie retired from US West Communications (the telephone company) in 1996 after 31 years of service. After... View Obituary & Service Information

The family of Marjorie Ann Legris created this Life Tributes page to make it easy to share your memories.