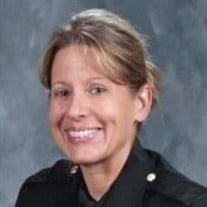 Bradley Police Department Sergeant Marlene R. Rittmanic was killed in the line of duty on Thursday, December 30, 2021. Marlene was born on October 6, 1972, the daughter of James and the late Mary Jane (Thompson) Rittmanic. She met her wife, Lyn Stua, on May 31, 1999 and they were married on June 11, 2011. Marlene was a 21-year law enforcement veteran, having served as both an Iroquois County Deputy and then Bradley Police Officer as of February 13, 2007, she was promoted to Sergeant on September 2, 2014. Marlene is survived by her wife Lyn Stua of Kankakee, her father James Rittmanic of Naperville, sisters Kimberly Organ of San Marcos, TX, Christina (Ty) O’Connor of Woodlawn, TN, Kathleen (Rodney) Emme of Bourbonnais, Colleen Welch of Plainfield; brother James (Trish) Rittmanic of Oswego; Sister Jennifer (Jerry) Whitaker of Kankakee; as well as several extremely loved, cherished, and close nieces and nephews. She was preceded in death by her mother Mary Jane Rittmanic, Sister Diana Jessen, Brothers Richard Rittmanic and Mark Rittmanic, and Nephews Richie Absher and Brett Mayhood. As avid dog rescuers, Marlene and Lyn have loved Mickey, Valentine, Samantha, Boo, Sophia, Trigger and Abeline. Marlene was a leader in community policing-Marlene believed in people and her ability to speak to the community with respect; meet them where they are in life; try to understand their true needs; and work together to find a solution that produced the least disruption in people’s lives. To her- the job was about making the community safe for everyone, she believed and I’m quoting her ”just because you can, doesn’t mean you should.” She was awarded Law Enforcement Officer of the year in 2020. Marlene is a published Poet, she was an amateur photographer and film producer for our family events, Bradley Police Department and community events. Visitation for Marlene Rittmanic will be held from 2:00-7:00 PM, Thursday January 6th at Olivet Nazarene University in the Hawkins Centennial Chapel, line up for the First Responders/Military walk thru will begin at 5:00 PM and the walk thru at 6:00 PM. Funeral services will be held at 10:00 AM, Friday, January 7th at Olivet Nazarene University in the Hawkins Centennial Chapel. A law enforcement procession will immediately follow. The public is encouraged to line the procession route to show support. Private Interment to follow at Abraham Lincoln Memorial Cemetery. In lieu of flowers, memorials in her honor may be made to the Marlene Rittmanic Memorial Fund at Federated Bank in Bradley, IL. Memorials will be accepted at the services and the Clancy Gernon Funeral Home in Bourbonnais, IL which is assisting with arrangements. The family is not utilizing any online crowdfunding sources.

Bradley Police Department Sergeant Marlene R. Rittmanic was killed in the line of duty on Thursday, December 30, 2021. Marlene was born on October 6, 1972, the daughter of James and the late Mary Jane (Thompson) Rittmanic. She met her wife,... View Obituary & Service Information

The family of Sergeant Marlene R. Rittmanic created this Life Tributes page to make it easy to share your memories.