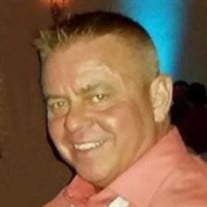 Raymond “Ray” Nolan, age 63 of Bourbonnais, passed away Friday, November 5, 2021, at Riverside Medical Center, Kankakee. Ray was born August 26, 1958, the son of Raymond and Betty (Hofrichter) Nolan. He married Dawn Kwiecinski on May 11, 1991, in Palos Heights. Ray worked as an electrician and later at United Airlines. Ray enjoyed being with his family, especially his grandchildren. He enjoyed golfing, working out, and traveling. Ray is a parishioner of Maternity B.V.M. Catholic Church in Bourbonnais. Surviving are his wife, Dawn Nolan, of Bourbonnais; one son, Michael Nolan of Bourbonnais; one daughter and son-in-law, Rachel (Tim) Williams of Bourbonnais; two brothers, John Nolan and Danny Nolan; three sisters, Sue Moland, Jodi Dalzell, and Kim Ingala; three grandchildren, Gavin Williams, Nolan Williams, Beckam Williams; father-in-law and mother-in-law, Richard and Adrienne Kwiecinski; and several nieces, nephews, and cousins. Ray is preceded in death by his parents, Raymond and Betty Nolan. Visitation will be held from 4:00 p.m. to 8:00 p.m. on Tuesday, November 9, 2021, at Clancy-Gernon Funeral Home in Bourbonnais. A funeral Mass will be celebrated at 10:00 a.m. on Wednesday, November 10, 2021 at Maternity B.V.M. Catholic Church in Bourbonnais. Interment will follow at All Saints Cemetery in Bourbonnais. Memorials may be made to family wishes.

The family of Raymond "Ray" Nolan created this Life Tributes page to make it easy to share your memories.