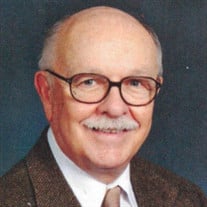 Richard "Dick" Balgeman, age 91, of Manteno passed away Wednesday, February 3, 2021 at Riverside Medical Center in Kankakee. He was born December 24, 1929 in Berwyn, the son of Vernon & Regina (Fitzgerald) Balgeman. Richard married Wauneta Laird on November 15, 1952 at St. Joseph Church in Manteno. Richard was the Chief Radiologic Technologist for Manteno State Hospital for 34 years. He also had worked for 4 years for Shapiro Developmental Center in Kankakee. He received his master’s degree from Governor’s State University in Alcohol Abuse Counseling. Richard was a Deacon at St. Joseph Church in Manteno. He enjoyed woodworking and doing yard work. He was instrumental in the Village View TV 10 in Manteno and getting the Manteno Golf Course started. Richard was a village trustee for 4 years in Manteno and had also owned/operated an antique shop called Bird in the Alley. Richard was the past Chairman of the planning commission for the Village of Manteno. He was listed in the “Who’s Who of the Midwest”. He was awarded the Manteno Historical Society Citizen of the Year and the Illinois Governors Award Superior Achievement in 1971. Richard was in the National Guard. He was a parishioner at St. Joseph Church in Manteno. Richard was very proud to have married many of his grandchildren and baptized many of his great-grandchildren. Surviving are his wife of 68 years, Wauneta Balgeman of Manteno; one son and daughter-in-law, Dan & Julie Balgeman of Westville; three daughters and three sons-in-law, Marcia & Mike Hellmuth of Bourbonnais, Kathy & John Howell of Bourbonnais, and Barb & Mike Adragna of Indianapolis, IN; one sister, Jayne Balgeman of Berwyn; one brother-in-law, Henry Laird of Dorsey; thirteen grandchildren, Matt (Anne) Hellmuth of Lockport, Meghan (Mike) Quinones of Chicago, Regina (Kyle) Richards of Hoopeston, Lyndsay Howell of Champaign, Sherry Mitchell of Houston, TX, John (Melissa) Howell of Flanagan, Amy (Chris) Lewis of Indianapolis, IN, Angela (Justin) Castelli of McCordsville, IN, Beth (Matt) Carson of Carmel, IN, Abby (Scott) Nieten of Noblesville, IN, Tony (Jess) Adragna of Indianapolis, IN, Taylor (Misty) Balgeman of Catlin, and Corey Balgeman of Miami, FL; and 26 ½ great-grandchildren. Richard is preceded in death by his parents and one brother-in-law, Bill Laird. Visitation will be held from 9 a.m. until the time of the 11 a.m. funeral Mass on Monday, February 8, 2021 at St. Joseph Church in Manteno. Due to the COVID 19 pandemic, face masks and social distancing will be required. The Very Rev. Richard Smith, Vicar General and Rev. Albert Heidecke will officiate the service. Cremation rites will be accorded following the services. Private family inurnment will be held at a later date at St. Joseph Catholic Cemetery in Manteno. In lieu of flowers, memorials may be made to St. Joseph Church. Arrangements by Clancy-Gernon Funeral Home in Manteno.

The family of Richard "Dick" Balgeman created this Life Tributes page to make it easy to share your memories.