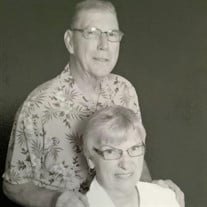 Robert Louis “Louie” Conover and Nancy Lee Biittner Conover Louie, 83, passed away peacefully on May 1, 2021, holding the hand of his wife of 58 years, Nancy, 84, who passed shortly after on May 25, 2021. Louie was born in 1937 in Woodland, IL, and Nancy in 1936 in Varina, IA. They met in Omaha, NE when Louie was serving in the Air Force. After a short romance, they married in 1962 in Omaha and then moved back to Illinois where they worked at Bradley Roper and General Foods, respectively. While raising their three children, they enjoyed archery, bowling, pitching horseshoes, and taking their children on adventures throughout North America. In retirement, they continued their adventure after they sold their home and explored the lower 48 in their motorhome. In their final years, they lived together in a Senior Living Facility in Monument, CO. Throughout their lives, they lived, laughed, and loved inseparably and now continue their journey together in heaven. They are the loving parents of David (Dawn Breeden) Conover of Kankakee, IL, Michele (Mike) Putnicki of Monument, CO, and Brad (Tanya) Conover of Saint Anne, IL. They have nine grandchildren, Melissa Adams, Amanda Conover, Jacob Putnicki, Autumn Conover (deceased), David Conover, Trace Conover, Michaela Putnicki, Riley Putnicki, and Kayle Conover. They have four great-grandchildren, Alexa Conover, Nikki Conover, Lukas Adams, and Arya Conover. Louie was preceded in death by his parents Fred and Beulah (Slater) Conover and his sisters Florence Hoke, Wilma Darche, and Lois Ownbey. He is survived by his brother Fred Conover of Yucca Valley, CA. Nancy was preceded in death by her parents Edward and Henrietta (Stoulil) Biittner; her brothers Jim, Denis, Eugene, Jack, Billy, and Ronald; and her sisters Gerry Tylski and JoAnne Revers. She is survived by her siblings Rita Childs of Rock Hill, SC, Sandy Frietzche of San Francisco, CA, and Larry Biittner of Pocahontas, IA. Cremation rites have been accorded. A memorial visitation will be held from 4:00 p.m. until the 6:00 p.m. memorial service on Monday, June 21, 2021 at Clancy-Gernon Funeral Home in Bourbonnais. Private inurnment will be held at Abraham Lincoln National Cemetery in Elwood. Memorials may be made to Pike’s Peak Hospice & Palliative Care in Colorado Springs, CO; www.pikespeakhospice.org

The family of Robert and Nancy Conover created this Life Tributes page to make it easy to share your memories.