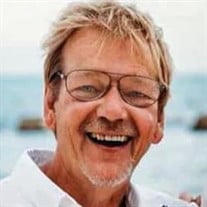 Robert “Papa” White, age 65, of Bradley was reunited with his son in Heaven on Tuesday, January 4, 2022. He was born August 10, 1956 in Hammond, IN, the son of Lloyd “Wayne” White & Louise Nelson. Robert married Marilyn Stutz in 1977 at St. Joseph Catholic Church in Bradley. Robert worked at Gould Battery in Kankakee until its closing. He owned and managed several properties in the Kankakee area. He loved being outdoors and enjoyed nature walks and road trips. Robert was a “jack of all trades” and had a tremendous sense of humor and exuded positivity. He was a man of unmeasurable patience. Surviving are his wife of over 40 years, Marilyn White of Bradley; one daughter and son-in-law, Jessica & Ryan Braun of Naperville; his mother, Louise Nelson of TX; his siblings, Dale & Dorenda White of Hawaii, Carolyn Morton of TX, Jerry White of CO, Kevin & Sheila White of CO, Thomas & Holly White of TX, Michael White of Gurnee, and Kenneth & Kathy White of TX; two grandchildren, Parker Harrison and Adelyn Braun; and several nieces and nephews. Robert is preceded in death by his father, Lloyd White; one son, Joshua White; and his stepfather, Larry Nelson Cremation rites have been accorded. A memorial visitation will be held from 10 a.m. until the 11 a.m. memorial Mass on Thursday, January 13, 2022 at St. Joseph Catholic Church in Bradley. Inurnment will follow at All Saints Cemetery in Bourbonnais. Memorials may be made to the family wishes, to go towards a college fund for his grandchildren.

The family of Robert "Papa" White created this Life Tributes page to make it easy to share your memories.

Robert “Papa” White, age 65, of Bradley was reunited with his...