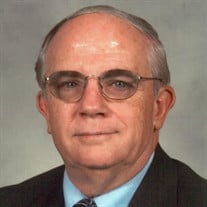 Dr. Robert W. Wright Retired Professor from Olivet Nazarene University Dr. Robert W. Wright, Jr 78 of Bourbonnais, passed away Sunday, October 17, 2021 at The Citadel Nursing Home in Bourbonnais. He was born May 13, 1943 in Indianapolis, IN to Robert W. Wright, Sr. and Martha Roberta (Glavind) Wright while his father was in medical school at Indiana University, Indianapolis. Robert married Marylon Thornton on August 17, 1968 at the College Church of the Nazarene, Bourbonnais. Marylon’s father, the Rev. Clarence W. Thornton, officiated their wedding. Robert grew up in Los Angeles, CA graduating from Los Angeles Pacific High School in June 1961. He graduated from the Los Angeles Pacific College, Los Angeles in June of 1965. He enrolled for the 1965-66 School year for graduate school at the University of California, Berkeley. He then returned home to Los Angeles where he began his doctoral program at the University of California, UCLA. He finished his doctoral program, June 1970 earning his Ph.D. With Distinction in Physiology. Soon after receiving his Ph.D he had the privilege of presenting a scholarly paper from his doctoral research at a symposium at Oxford University, Oxford, England. The Wrights moved to Bourbonnais in 1970 where Robert began his teaching career at Olivet Nazarene College, now University, in Bourbonnais teaching Anatomy and Physiology and upper division courses. He taught 41 years at Olivet, 38 full-time years then 3 years as part-time following retirement. He is survived by his wife, Marylon; his brother Richard (Kathy) of Jonesborough, TN; two nieces, Amanda Wright Golyshko (Phillip), their daughter, Mira and Bethany Wright Greiner (Jared), their daughters, Madeleine, Abigail, Lillian and Anneliese of Westminster, CO; and one nephew, Ricky (Richard II) of Jackson Hole, Wyoming. He was proceeded in death by his parents; identical twin sisters shortly after birth; brother, Dr. David Wright; and sister, Kathleen Ann, aged 13. Visitation will be held from 12 p.m. until the time of the 1 p.m. funeral service on Thursday, November 4, 2021 at the College Church of the Nazarene in Bourbonnais. Dr. Mark Quanstrom, Dr. LaVerne Blowers, and Rev Richard Wright, via video, will officiate the funeral service. The service will be livestreamed via collegechurch.org. Inurnment will be at the Columbarium at Olivet Nazarene University at a later date. Memorials may be made to the Rev. Clarence and Georgia Thornton Scholarship fund at Olivet Nazarene University, Bourbonnais, IL Robert was a faithful member of College Church of the Nazarene and a devoted follower of Jesus Christ. Clancy-Gernon Funeral Home of Bourbonnais is handling the funeral arrangements.

The family of Dr. Robert W. Wright created this Life Tributes page to make it easy to share your memories.