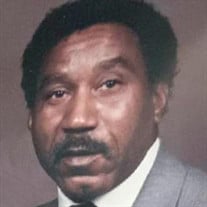 Samuel Lee “Sam” Ward Jr., age 75, of Kankakee passed away Saturday, December 25, 2021 at AMITA St. Mary’s Hospital in Kankakee. He was born March 20, 1946 in Chicago, the son of Samuel Lee Sr. & Claudia Ward. Sam married Charlotte Brown on July 22, 1964 in Chicago and remained in Holy Matrimony for 57 years. Sam received his Associate In Arts Social Service, on August 7, 1976. He worked in the construction field and was a member of Laborer’s Union Local 5. He was an accomplished self-taught musician, his primary instrument being the “Guitar”. He could fix anything and was considered a “jack of all trades”. Sam was a beloved husband, father, grandfather, great-grandfather, who enjoyed cooking, loved to fish, and enjoyed the outdoors. Surviving him: his beloved wife, Charlotte Ward of Kankakee, IL; his children, Sarah Mack of Kingsbury, TX, LaTonya Byars (Clarence Peterson) of Pearland, TX; Samuel Lee Ward III (Cynthia) of Henderson, NV; Lydia Marie Robertson of Chicago, IL; and Lisa Renee Anderson of Lexington, SC; beloved sister, Elaine L. Lee of Streator, IL; eighteen grandchildren, twenty-one great grandchildren, and a host of nieces and nephews. Samuel was preceded in death by his parents and daughter, La Verne L. Blasingame, PhD. Visitation and Funeral Services will be held Sunday, January 2, 2022 from 12 to 2 p.m. at Clancy-Gernon Funeral Home in Kankakee, IL. In lieu of flowers, memorials may be made to MD Anderson Cancer Center in Houston, TX.

The family of Samuel Lee "Sam" Ward Jr. created this Life Tributes page to make it easy to share your memories.