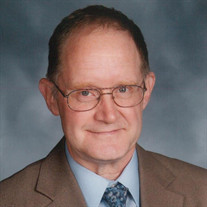 Stephen W. Frank, age 68, of Bourbonnais, passed away Tuesday, February 22, 2022 at Prairieview Lutheran Home in Danforth. He was born April 2, 1953 in Kewanee, the son of Charles Henry & Lula Mae Ratliff Frank. Stephen married Marilyn Reifsteck on June 2, 1984 at Asbury United Methodist Church in Kankakee and recently celebrated 37 years of marriage together. He was a passionate educator in the area for 35 years. Stephen taught mathematics and was a guidance counselor at Momence High School before leaving for Kankakee High School where he retired in 2011. Stephen was an active and devoted member of Asbury United Methodist Church for over 40 years. He thoroughly enjoyed participating in the church over the years as a Sunday school teacher, Stephen Minister, choir member, and youth group parent among many other activities. Leaving behind are his wife, Marilyn Frank of Bourbonnnais; three sons, Joel & Nikki Frank of Mokena, Jordan Frank of San Antonio, TX, and David & Kendall Frank of Bourbonnais; two brothers, Bruce Frank of Buda and Russell Frank of Manlius; one brother-in-law, Tom VanVooren of Sheffield; three grandchildren, Everly Frank, Camille Frank, and Raia Frank; and several nieces, nephews, and cousins. Stephen is preceded in death by his parents; and sister, Linda VanVooren. Cremation rites have been accorded. A memorial visitation will be held 4:00 p.m. – 7:00 p.m. on Friday, February 25, 2022 at Clancy-Gernon Funeral Home in Bourbonnais. A memorial service will be held at 11:00 a.m. on Saturday, February 26, 2022 at Asbury United Methodist Church in Kankakee. Rev. Scott Henley will officiate the service. Memorials may be made to Brain Support Network, Asbury United Methodist Church, or Uplifted Care.

The family of Stephen W. Frank created this Life Tributes page to make it easy to share your memories.