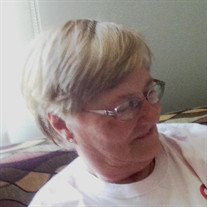 Theresa J. “Terry” Kotty, age 78 of Bourbonnais, passed away on Monday, October 11, 2021 at her home. She was born November 20, 1942 in Chicago, the daughter of Jerry and Alice (Hulka) Koutney. Terry was an office manager in the medical supply industry. She was an Avid Chicago Cubs Fan. Terry attended Maternity BVM Church. Surviving are two sons and one daughter-in-law, Steven Kotty of Bourbonnais, Raymond (Donna) Kotty of Park Ridge, IL; one daughter, Chandra Boyd of Las Vegas, Nevada; three sisters and one brother-in-law, Patricia Hineline of Chesterton, IN, Tony (Carl) Studer of Sumava Resorts, IN, Charlene Hansen of Shelby, IN; one brother and sister-in-law, Jerome (Barbara) Koutney of Lake Village, IN; five grandchildren, Chance and Cassidy Toy, Eddy and Billy Kotty, Parker Boyd; and many nieces and nephews. Terry is preceded in death by her parents; and one brother, Rodney Koutney. Visitation will be held from 11:00 am until the 1:00 pm funeral service on Friday, October 15, 2021, at Clancy-Gernon Funeral Home, Bourbonnais. Father Jason Nesbit will officiate the funeral. Cremation rites will be accorded following the service. Memorials may be made to the Family Wishes.

The family of Theresa J. "Terry" Kotty created this Life Tributes page to make it easy to share your memories.