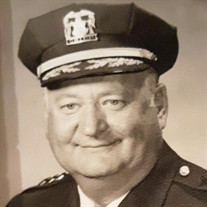 Thomas W. Maass, age 96, of Kankakee passed away Friday, September 3, 2021 at Heritage Village in Kankakee. He was born March 2, 1925 in Kankakee, the son of William & Theresa (Ray) Maass. Thomas married Mary Jannusch on September 28, 1946 in Kankakee. Thomas was the former Police Chief in Kankakee from 1965-1970. He also served as Sheriff of Kankakee County from 1970-1974. He was a lifetime member of the Shriners, American Legion Post 85, Kankakee V.F.W. and the Kankakee Elks. He was a member of the National Association of Sheriff’s and the National Association of Police Chief’s. Thomas helped W.D. Gousset with the formation of The Hundred Club and was honored by the American Red Cross for achieving 16 gallon blood donation. He enjoyed reading, gardening, and traveling. He was a veteran of the United States Army having served in the 101st Airborne Division. He participated in D-Day and served as an M.P. in England and Paris. Surviving are his wife, Mary Maass of Kankakee; one son and daughter-in-law, Thomas C. & Miriam Maass of Kankakee; one daughter and son-in-law, Janet & Rick Foltz of Santa Rosa Beach, FL; and three grandchildren, Casey Maass, Rachel Maass (Andy Lopez), and Lauren (Trevor) Baron. Thomas is preceded in death by his parents; three brothers, William, Rodney, and James; and one sister, Rosemary Morrison. Private family services will be held. Interment will be at Abraham Lincoln National Cemetery in Elwood. Memorials may be made to the Uplifted Care, St. John United Church of Christ, or Salvation Army.

The family of Thomas W. Maass created this Life Tributes page to make it easy to share your memories.