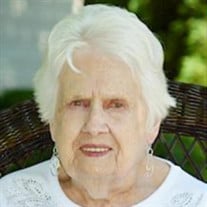 Velma J. Shear, age 97, of Grand Rivers, KY, formerly of Bourbonnais, passed away Monday, March 14, 2022 at her home with her daughter’s by her side. She was born June 30, 1924 in Bluffs, the daughter of Jesse & Mabel (Dimmitt) Batley. Velma married Francis “Nick” Shear on August 1, 1945 in Smith County, TX. He preceded her in death on March 27, 1981. Velma was a homemaker. She had worked at Bear Brand Hosiery and for Bennett Industries. Velma enjoyed bowling, dancing, crocheting, knitting, and all crafts. Most of all, Velma, loved babysitting her grandchildren. Surviving are four daughters and two sons-in-law, Linda Ashline of Grand Rivers, KY, Sheila Woods of Joliet, IL, Brenda & Terry Bayston of Grand Rivers, KY, and Debbie & Bobby Burrus of Kankakee; one sister, Julia Tucker of Dale, IL; nine grandchildren; twenty-one great-grandchildren; and seventeen great-great-grandchildren. In addition to her husband, Francis “Nick” Shear, Velma is preceded in death by her parents; one brother, Charles Batley; one great-grandson, Van Lindstrom; one great-granddaughter, Jacqueline “Prince” March; and special friend, Harry Marcotte. Private family services will be held. Interment will be at Kankakee Memorial Gardens in Aroma Township. Memorials may be made to Mercy Lourdes Hospice in Paducah, KY. Arrangements by Clancy-Gernon Funeral Home in Bourbonnais.

The family of Velma J. Shear created this Life Tributes page to make it easy to share your memories.