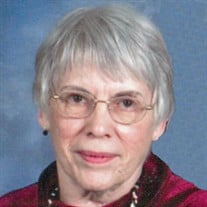 Wanda Edith “Edie” Adams passed away Sunday, October 10, 2021, at her home in Bourbonnais, Illinois. She was born December 22, 1932, the eleventh child of Anna Katherine Cummins Polk and Lloyd Lemuel Polk in Allendale, Illinois. Edie married Robert W. Adams on December 15, 1951. They had one daughter, Pamela Jean, born January 11, 1955. She passed away in 1985 from a car accident. Robert was in the Navy when he and Edie met in church. They only had eyes for each other. After Robert was discharged, he and Edie moved to the Kankakee area. Edie worked at an answering service, taking calls for doctors. She also worked as a pharmacist’s assistant at Jaffe Drug Store. Edie attended beauty school, where she eventually taught before opening her own shop in her home. Edie was a member of St. Paul Lutheran Church in Kankakee. Edie was preceded in death by her parents; daughter Pamela Jean Hasenjaeger; siblings Perry Polk, Geraldine Taylor, Bernadine Cooper, Wilma Vowels, Charlotte Stout, twins Herbert and Howard Polk, Betty Ditzler, Patty Zilliox and Jack Polk. There was also an infant sister, Avis. Edie is survived by her husband Robert of Bourbonnais, and many nieces and nephews. There will be a visitation from 10:00 a.m. until the 11:00 a.m. funeral service on Thursday, October 14, 2021, at Clancy-Gernon Funeral Home, Bourbonnais. Burial will follow at Kankakee Memorial Gardens, Kankakee. Memorials may be made to St. Paul Lutheran Church, Kankakee.

The family of Wanda Edith "Edie" Adams created this Life Tributes page to make it easy to share your memories.