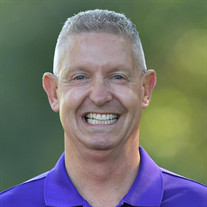 William W. “Bill” Johnson, age 61, of Bourbonnais passed away Wednesday, August 11, 2021 in Bourbonnais. He was born June 1, 1960 in Chicago, the son of Kenneth & Patricia (Cote) Johnson. Bill married Barbara Foltz on April 20, 1996 at College Church of the Nazarene. She preceded him in death on August 17, 2010. Bill was raised in Clifton and lived for a short time in Momence. He was a star football player at Clifton High School. He started and successfully built Central Illinois Benefits Consulting (CIBC). He was the former head girls golf coach at Bishop McNamara Catholic School. Bill was also the Director of Golf and the head women’s golf coach at Olivet Nazarene University over the past 12 years. He was a longtime member of the Kankakee Country Club and Flossmoor Country Club. Bill was a long-term board member at Youth for Christ and former board member at the Kankakee YMCA. He loved watching the Chicago Cubs, the Masters, and Notre Dame. Bill was a veteran of the United States Marine Corps, Lance Corporal. Surviving are two daughters and one son-in-law, Olivia Johnson of Kankakee and Brynn & Brandon Fitzmorris of Louisiana; two sons and two daughters-in-law, Brock & Kristen Schultz of Herscher and Brandt & Asya Schultz of Herscher; six grandchildren; his mother, Patricia Johnson; one brother, Daniel Johnson of Kankakee; and several nieces and nephews. In addition to his wife, Barbara Johnson, Bill is preceded in death by his father. Visitation will be held from 4-8 p.m. Friday, August 20, 2021 at Clancy-Gernon Funeral Home in Bourbonnais. A funeral service will be held at 10 a.m. on Saturday, August 21, 2021 at River Valley Christian Fellowship in Bourbonnais. Interment will be at 10 a.m. Monday, August 23, 2021 at Abraham Lincoln National Cemetery in Elwood. Memorials may be made to Youth for Christ or the ONU Golf Program.

The family of William W. "Bill" Johnson created this Life Tributes page to make it easy to share your memories.