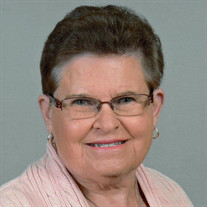 Zona Elizabeth “Betsy” Morrical, age 80, a resident of Columbia, TN, formerly an area resident, passed away Friday, July 23, 2021, at her residence. Betsy was born on December 18, 1940, in Sullivan, Indiana and was the daughter of the late Vaughn F. Jones and the late Lois Lindley Jones. She earned her bachelor’s degree in education from Indiana State University and later in life earned her master’s degree from Olivet Nazarene University. She worked as a speech therapist for the Peotone School District in Illinois where she retired and later transferred to Tennessee where she worked for the Maury and Lawrence County Public School Systems before retiring for a second time. Betsy married Reynold Morrical on October 31, 1981; he preceded her in death on April 2, 2019. She was a member of St. Catherine Catholic Church where she served as a Eucharistic Minister and for the Martha Ministry. Betsy enjoyed traveling and quilting and had a special love for her beloved cat, Gracie. She is survived by her daughter, Denise (D’Arcy) Ballinger of St. Anne, Illinois, son, Ken Trevarthan of Charleston, Illinois, stepson, Stuart Morrical of St. Charles, Illinois, grandchildren, Michael (Courtney) Poynter, Sera (Eli) Welch, James (Hope) Trevarthan, Maddy Morrical, Alexa Morrical, great grandson, Maxwell Poynter, and her former husband, Fred Trevarthan. In addition to her husband and parents, she was preceded in death by her sister, Virginia Hooper. A visitation will be held from 10-11:00 a.m. on Tuesday, August 10, 2021 at Clancy-Gernon Funeral Home in Bourbonnais. A procession will leave the funeral home at 11:00 a.m. to St. James Cemetery in Irwin. In lieu of flowers, the family requests memorial donations be made to the Maury County Animal Shelter, 1233 Mapleash Avenue, Columbia, TN 38401.

The family of Zona Elizabeth "Betsy" Morrical created this Life Tributes page to make it easy to share your memories.